Wow, so I just watched the remake of Day Of The Dead and it power sucked. Like really, really bad. I wrote my review as I always do when I watch a movie and literally couldn’t give it more than 3/10 which is the worst score I have ever given to a zombie movie ever.

I do love me some zombie flicks though. So in order to purge myself of that total crapfest I just subjected myself to, I am gonna talk about some fairly recent zombo flicks I dig that you might have missed and why I loves ’em.

Dance Of The Dead is great fun. The zombies run and they explode out of graves and they can be stopped with rock music, its a friggin’ riot! I saw this at Fright Fest last year and just wailed with laughter from start to finish, it is an awesome take of the kids versus zombies story and proves that people don’t care what crazy shit your zombies can do as long as you make a good movie. If you haven’t seen it I definitely recommend you check that mother out.

Boy Eats Girl is another zombie comedy with a slice o’ romance in it that is set in a school, and was clearly made off the back of the success of Shaun Of The Dead. It stars Samantha Mumba (!) and that dude off Cutting It as a couple of high school kids who are in love but too scared to say it, until one of them becomes dies and is resurrected. It is pretty silly, but I really dig the way it pokes fun at american high school movies with 35 year old protagonists and that it doesn’t resort to CGI too much for its gore.

Night Of The Living Dorks is yet another comedy laced zombie movie set in a school, this time three nerdy lads are around when some of their goth chums attempt a voodoo ritual which fails. Or does it? The boys later die in a car crash and awake as zombies. This german flick is just great, really funny dialogue and situations with oodles of decent gore. It is good to see the Romero vision of personality retention in the undead used to such a silly extreme as to beat the jocks at sports and such. Watch it!

Wild Zero is a ridiculously silly Japanese zombie flick built around the band Guitar Wolf, it isn’t set in a school but there is some romance in the mix. In an alien invasion which is zombifying humans fast, a guy and his hermaphrodite lover are made honorary members of Guitar Wolf to save the world using rock, roll and massive hairdos. It is just as wacky as you’d expect, and chock full of crappy effects and a punk n roll soundtrack. 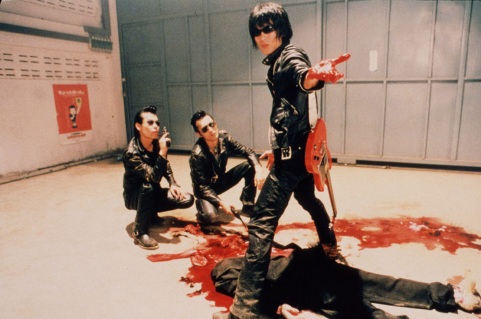 I, Zombie is not a comedy, it isn’t set in a school, and it isn’t a good fun romp through the guts of some half nude teens. It is a character study by a british director which looks at what happens to a person when they go through the change from man to monster. It really is all very grim, even though most of the movie takes place alone in a room with this unfortunate character. When I saw it for the first time a few years back, I was struck by the originality of it and by how dark it was.

Undead is a comedy, and a western, with zombies. And it is Australian. Wacky huh? It is great fun though, with some brilliant gore and a premise that is really out there. Some meteors fall down and make people turn into zombies while this cowboy guy shoots them in the head. Then some aliens come and everything goes batshit awesome. It is particular worth watching for the awesome make up and gore effects!

So there is five flicks to get out there and see! I feel better now, somehow cleansed by flicks I dig. The vibes of hate replaced with lovely vibes that make me happy. Sort of.

1 Response to Where we’re going we don’t need Rhodes.